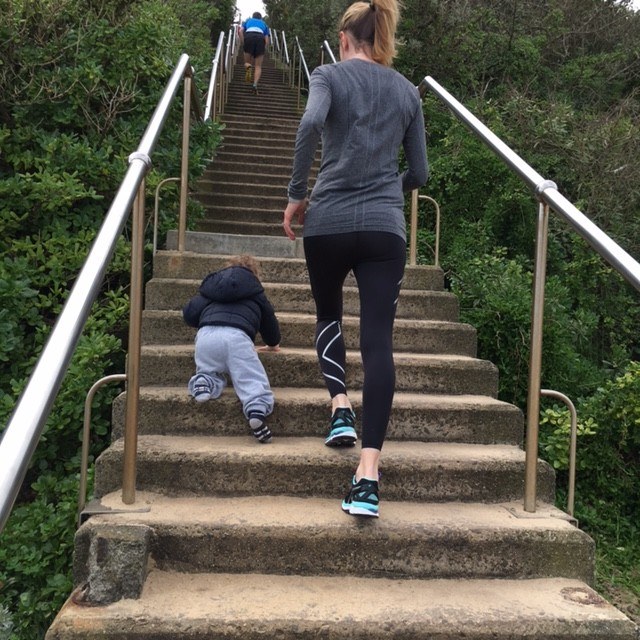 I recently caught up with Chris White (Recreational Running Coach, Go Run Australia) and he asked me an interesting question…”What do you think are the main things that stand in the way of getting back into running for new mums?”

It got me thinking about my experiences with returning to running post bub and I also asked some friends and clients who were into running pre-baby to get their thoughts.

According to one new mum, the number one thing was “succumbing to excuses like its too hot or cold outside for me or the baby; my exercise clothes don’t fit or I need more sleep.”

Chris commented, “I hear my fair share of excuses and these ones are not that unusual, even from runners who are not new mums!  The challenge is that these thoughts are very real and have the ability to de-rail even the best training plans. To counter these, there simply has to be an opposing force which is stronger than your excuse, in order to get you out of the door and running again.”

Accountability and motivation are key here.  They are the two biggest, most positive forces behind people successfully getting back into their running.  As our new mum went on to say, “It’s so easy to give in to these excuses when you’re only accountable to yourself.”

Having a coach or a regular class that you attend provides that accountability, structure and often the motivation to keep you on track and give you much needed momentum. Having to be at a class at a particular time or meeting up with a friend to exercise is a great tip to make you more accountable. For me sleep deprivation was the common excuse I used (and still do at times). But every time I exercise, I come back feeling more energized even if I started the session tired and lethargic.

Be careful, however, you can’t just go out in week one post pregnancy and start running 10km every day!   An important part of returning to exercising after having a break, for whatever reason, is starting back slowly and having a regime or plan. They say the busiest people have the most time, but part of this is that busy people are good at scheduling. Pre-baby you’re often able to be selfish and schedule your life solely around yourself. In the free time between work and socialising, it was certainly a lot easier to schedule time to exercise. Post-baby, the ability to do what you want whenever you want, changes. Suddenly you have to prioritise someone else.

In the early weeks (4-6 weeks) post baby the best exercise you can do is getting out and walking. It’s good cardiovascular exercise, as well as good mentally to prevent cabin fever. Babies often love fresh air and sleep well with movement- bonus! Newborns sleep a lot, so it’s a great way to get exercising without having to schedule specific time for it.

After the first 1-2 months it’s great to return to some structured exercise whether it be Pilates, yoga or gym.  It’s not advisable to do high impact exercise until your pelvic floor is strong enough. In most cases this means no running until about 12 weeks post-natal. At this time, as long as you’re not experiencing pelvic pain or weak pelvic floor symptoms such urinary frequency, urgency or incontinence, returning to running is OK. It’s always best to return to running gradually. For me this meant running 400m on/off at first and building up to 2km after the first few weeks. For a previous marathon runner, 2km suddenly felt like forever!! I gradually built this up to 10km over 3-5 months. Not only do we need to give our bodies time to recover from the stress of labour (or to heal post caesarian), but remember you’ve had a break from running for sometime whilst pregnant (this time obviously varies considerably for each individual). I stopped running early on in my pregnancy, so by the time I started back I had not run for 10months. Starting back slow and building up gradually is the key to preventing injuries. It also helps to join a running group or have a running program written up for you so you have a plan and again can schedule times in to your day which is otherwise ruled by baby sleeping, feeding and pooping regimes!

Another thing to keep in mind for breastfeeding mums, scheduling time in to run is often best straight after feeding, when you’re carrying around a little less load! The things you don’t think about pre-baby!

Before having a baby, I had all these great ideas about returning to running pushing bubs along. In reality this wasn’t as easy as it sounds. It’s not safe to push a baby along whilst running until they have adequate head and neck control. This is usually around the 6 month mark when they can sit upright independently. There are particular running prams that are easy to maneuver, but even so pushing a pram into a strong headwind is HARD work- albeit good resistance training! Another thing to keep in mind though before forking out big bucks on a running pram, is not all babies like being constricted to a pram and sometimes it’s just easier to leave them at home with dad!

Don’t be too tough on yourself when planning your return to running or any other form of exercise. Have realistic achievable goals as this will certainly boost your motivation. Remember to always listen to your body. If something hurts or doesn’t feel quite right don’t push through it. It’s always best to consult your doctor or physiotherapist to check that you are ready to return to impact exercise. The physio’s at PMPP are always happy to chat to your doctor or obstetrician, and we work closely with other allied health professionals and with Chris from GoRun Australia should you be interested in discussing a running plan.