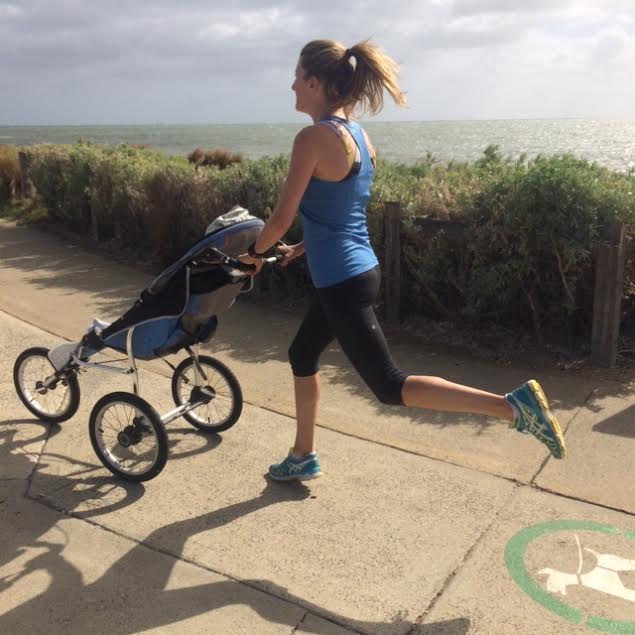 When I found out I was pregnant, like most women I was concerned with weight gain and wanted to fit back into my normal wardrobe again. I also wanted to be able to continue exercising which was a big part of my life before. I was used to running 3-4 times per week, doing gym or high impact exercise and of course Pilates. I spoke to my obstetrician on one of our first visits, and he was happy for me to continue doing anything I was previously doing (which included running and jumping activities) as my body was used to it.

Well my body had different ideas. From about 8 weeks pregnant (remember the foetus at this stage is only about the size of a raspberry), running just felt wrong. I felt a heavy bearing down around my stomach quite similar to bad period pain and I decided I was going to stop running pretty early on. This decision was likely influenced by the fact I had suffered a miscarriage 2 months prior and didn’t want to take any risks, despite knowing that unfortunately miscarriages happen as often as 1/5 women and exercising would have had absolutely nothing to do with it.

I should add here that many women continue running for longer periods into their pregnancy, and if you are a runner before falling pregnant this is perfectly safe to continue, but I decided to explore other options. I started walking much more than I had ever done before. I dabbled in swimming occasionally which is a great form of exercise when you’re pregnant as the buoyancy of the water alleviates any pressure through tired/ sore joints. I started doing some Preggie belly classes (mainly for a laugh as I have never been an aerobics kind of girl), and of course I continued doing Clinical Pilates regularly at PMPP. I was fortunate not to suffer from pelvic instability or back pain during pregnancy, but swimming and Pilates probably helped with that.

I gave birth to a healthy baby boy in June 2015

Everyone talks about labour while you’re pregnant, but no-one mentions the weeks after. I knew I was going to be tired, but wow- it literally feels like you have been hit by a bus! Up every 2 hours feeding, settling, changing nappies etc… In the first month, the only exercise I did was some gentle walking and some pelvic floor exercises. Just getting out the house was a pretty big accomplishment, but I did really enjoy getting out for walks to get some air and prevent cabin fever.

By week four I was desperate to get back in to some Pilates. I started back gradually with basic exercises. I did plenty of floor based Pilates exercises at home as well, but I’m the first to admit I couldn’t get in to the clinic as often as I would have hoped to do Pilates, as again, no one had mentioned that you feed 8-10 times within a 24hour period, and that means you may get about 1 hour free time between feeds and settles. It wasn’t until about 4-5 months post-natal that I got in to any routine and started getting a bit more of a hold on my life again. Clinical Pilates during pregnancy and in the months following likely did help prevent any diastasis (separation) of my abdominals and I do believe it helped my post-natal recovery.

I waited until 12 weeks PN to start running. Prior to this- walking is enough impact on one’s pelvic floor. As I read recently- we are only given one pelvic floor and we should respect it! My first run back was about 1km or jog/walks. This felt like a marathon, which was so deflating for someone that is used to running half marathons several times a year. I had to keep reminding myself that I hadn’t run for 10months and getting back in to it again would be slow. Another thing that slowed my return to running was having to schedule any runs straight after a feed so I wasn’t carrying around the extra weight and bounce! Oh the perils of being a woman!!

Anyway, it’s safe to say it has been a very gradual progression. I have just purchased a second hand running pram and now that Asher can sit independently I’ll be able to run a bit more often with him. I’m up to running 12km and have set the goal of doing ‘the runs for the kids’ 16km in March- so stay tuned!